It all started with a call for entries – 18 months later the 6-metre-sculpture was mounted. Here comes the story of an extraordinary journey, in images and a short video.

In autumn 2018, the selected artists gathered at the construction site, invited by the architect and Hawa management. The headquarters of this world-leading manufacturer of sliding systems was about to be renovated – the journey begins:

Art contest: accent for the entrance
Customers have to use a staircase to get to the first floor – how do you lead them up? It’s nice that art was included in the budget for this renovation. This call for ideas should lead to the best solution. 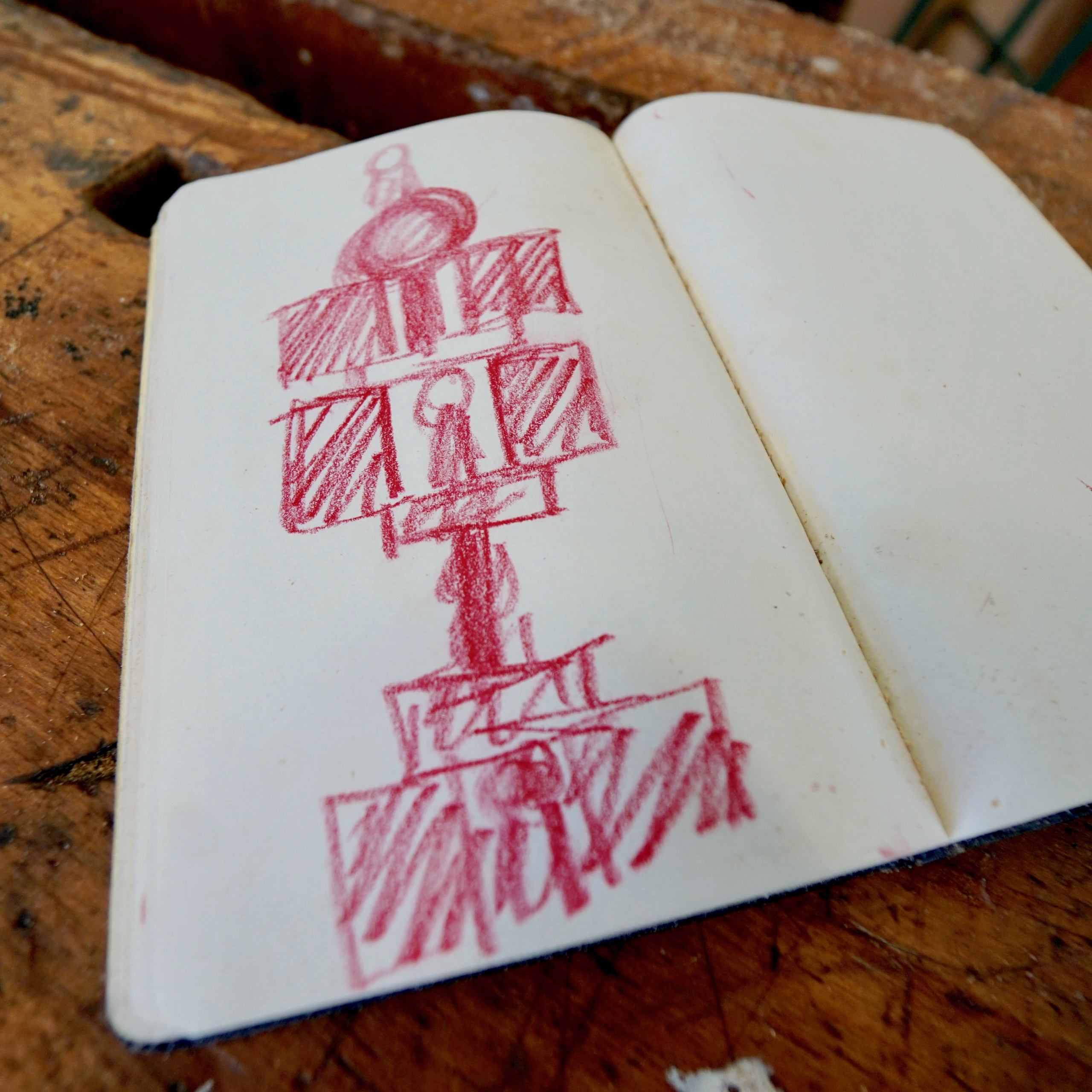 Off to the studio. Develop ideas, discard, sort, sketch.

My final suggestion: creating a metaphor for teamwork with sliding elements. Several figures are to accompany visitors all their way up to the reception, for a total of six metres. To test this idea and for the presentation, I create a small model, carved out of ash tree with a chainsaw. 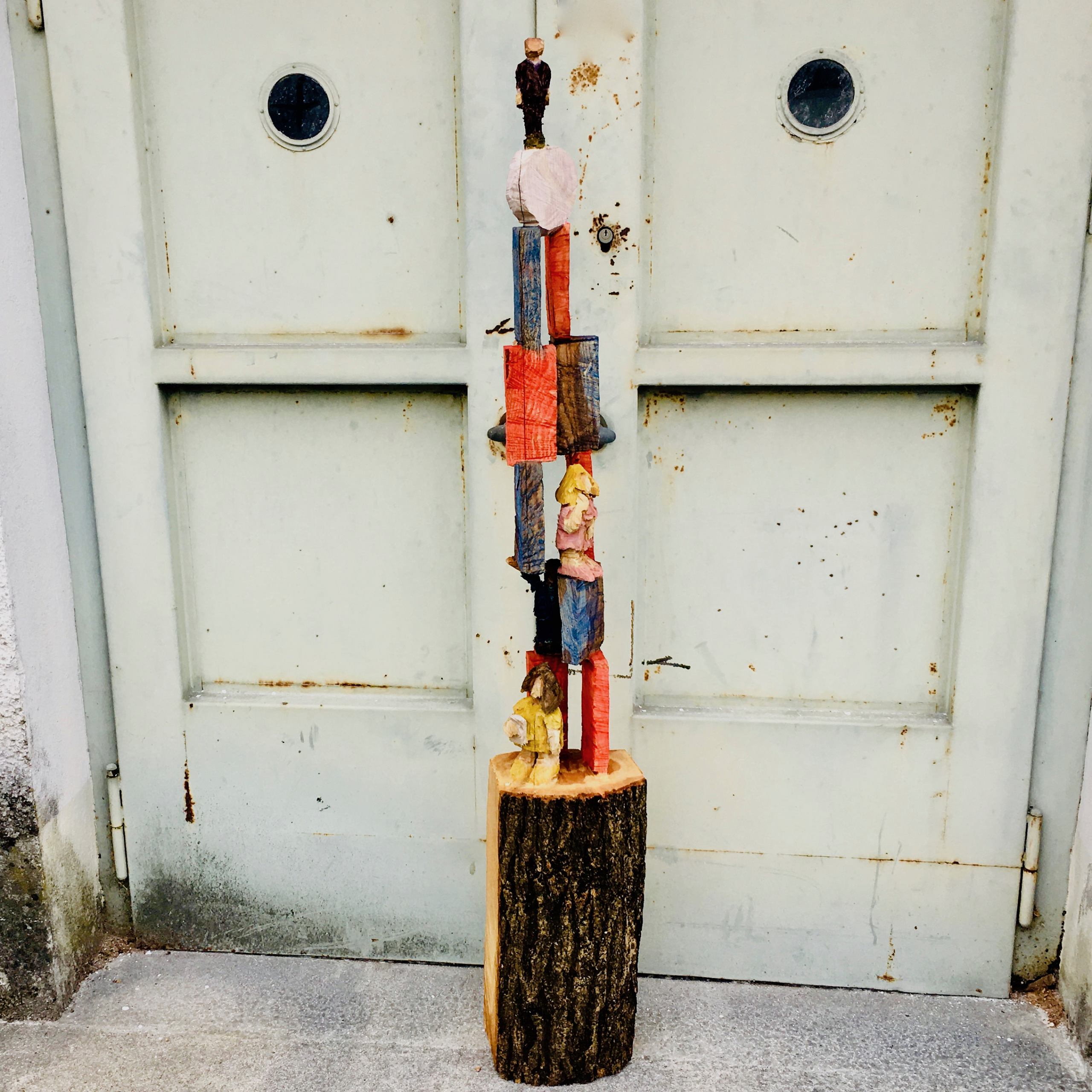 Three months later I receive a surprising, great message: My idea has won. Really? Well then – the first hurdle shows up: how do I manage the jump from my 160cm model to 615cm reality?

Discussions with professionals and research lead to the solution: the figures are cut from a massive beam instead of a “shapeless” trunk. That way I have a fixed outer dimension which will be needed for handling. 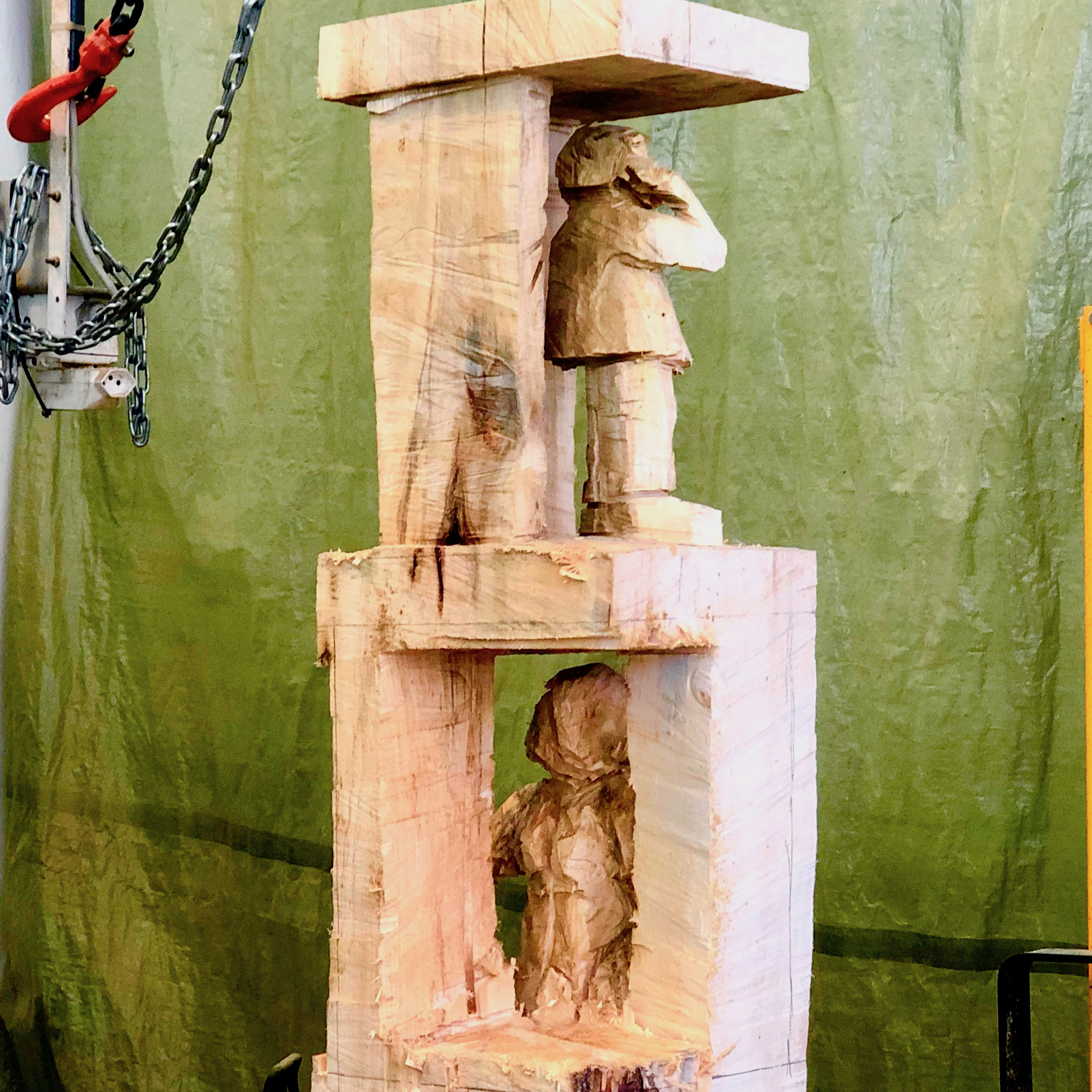 Thus every 30 cm I let this outside measurement of the beam as it is. In between, I am left with 25 cm for the figures and two staggered «walls», which act as a stabilizing connection between “floor” and “ceiling”.

This is what the 1:1 model looked like later, to test the idea with the chainsaw. The challenge: to carve out small figures precisely, leaving the needed connecting parts at the sides, bottom and top. 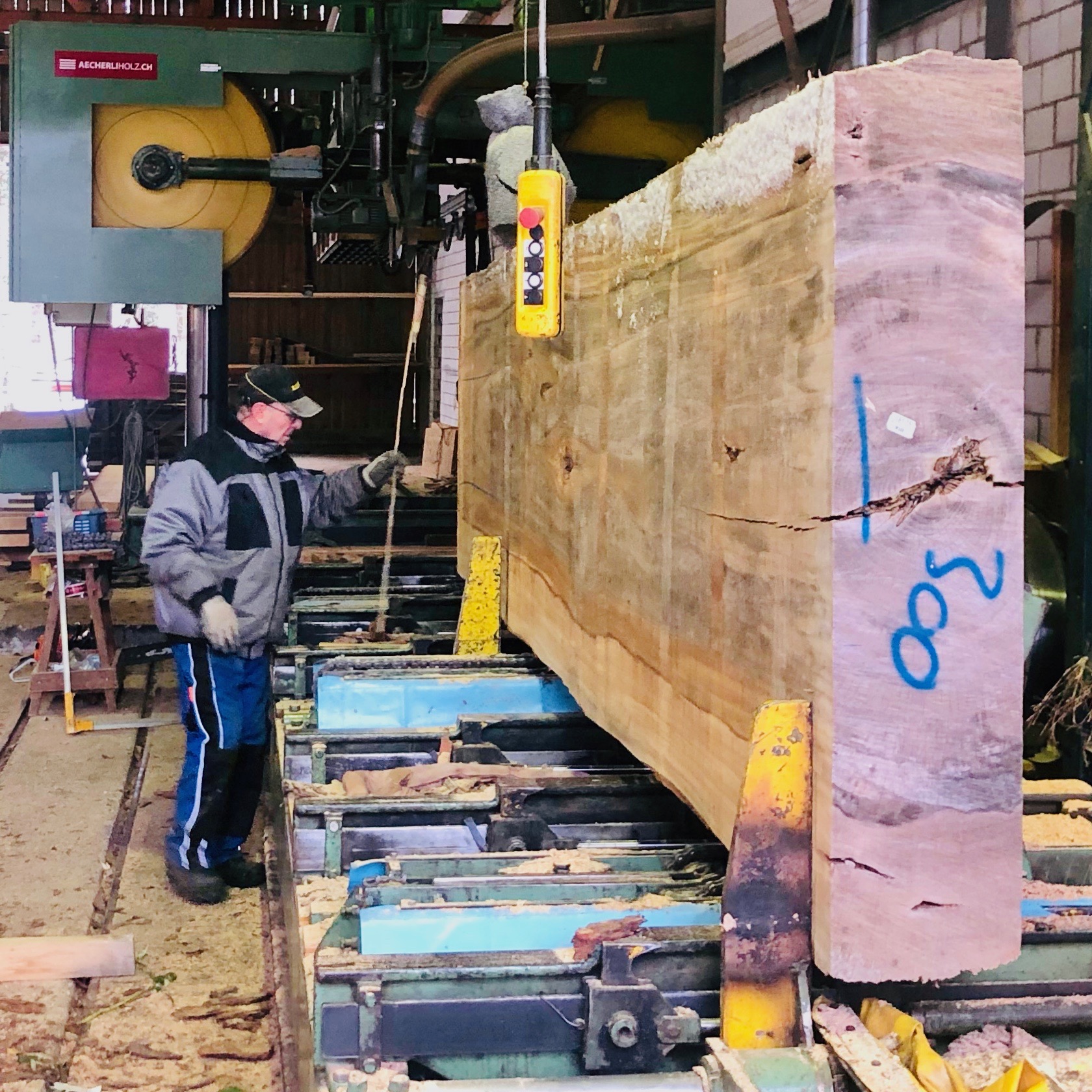 After a long search, I finally found what I was looking for: together with the discovered sawmill, we chose a four-metre board, 30 cm thick, cut from the core of an extraordinarily large linden tree. From this board the professional cut out two beams of 30×30 cm; with as few damaged spots or inclusions as possible along the whole length. It is impressive to see the precision with which this giant saw is operated.

Installation in the studio 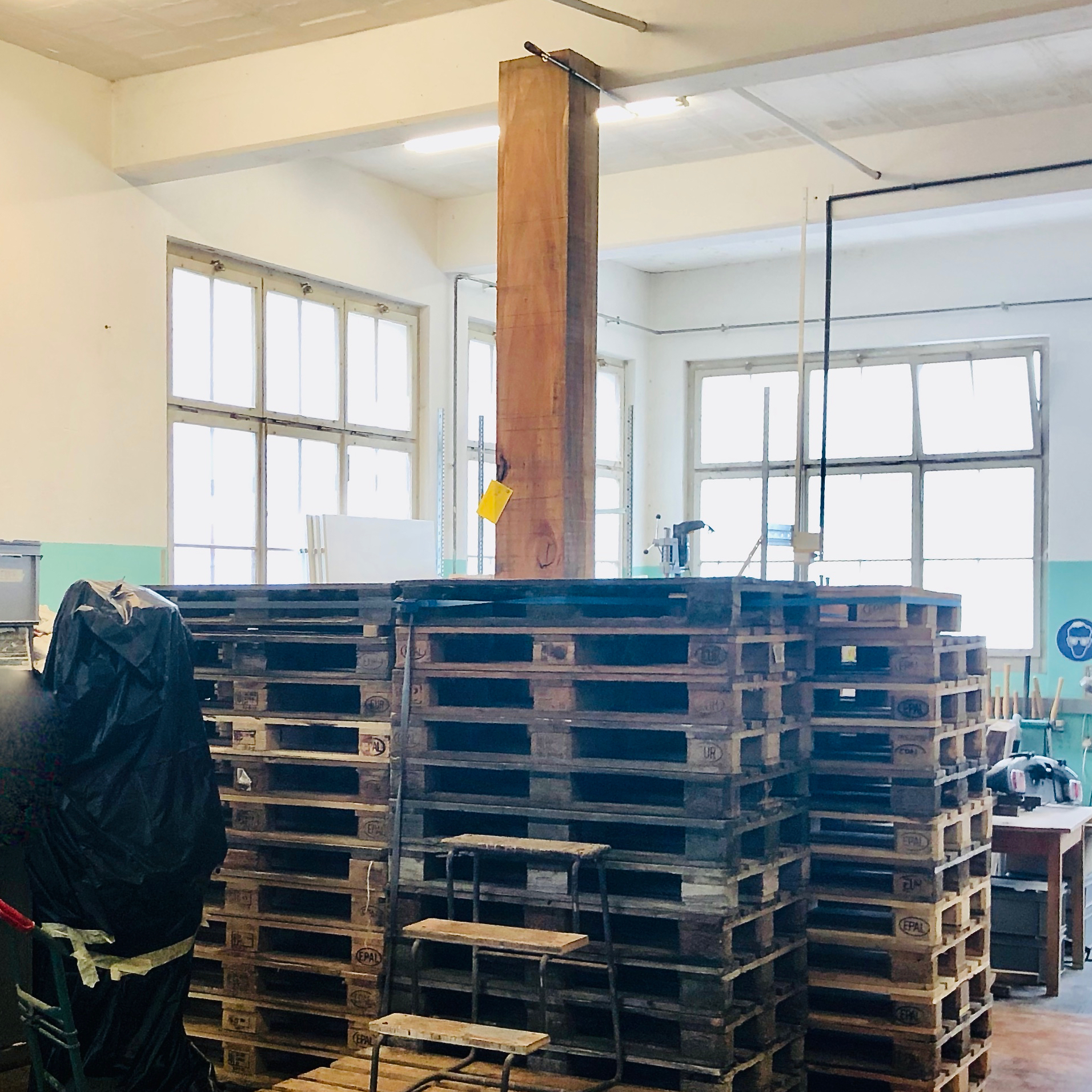 Each of these beams weighs around 200 kg; the last few metres into the studio and setting them up is an adventure in itself.

From now on, a fat base plate secures the beams at the bottom, a screw clamp on the roof fixates it at the top. Stacked pallets provide the scaffolding. They can be easily moved to the respective working height.

Cutting from the solid, from top to bottom

At the initial working height of around two metres, I secure myself with a climbing harness on the beam to prevent any misshaps.

After many weeks they have finally arrived, 14 figures spread over two beams. Sawed out until the end without any fatal errors. They are arranged in such a way that on the way up they turn towards the stairs – so that the customers climbing the stairs can smile at them. Here the two rough cuts are primed with linseed oil. 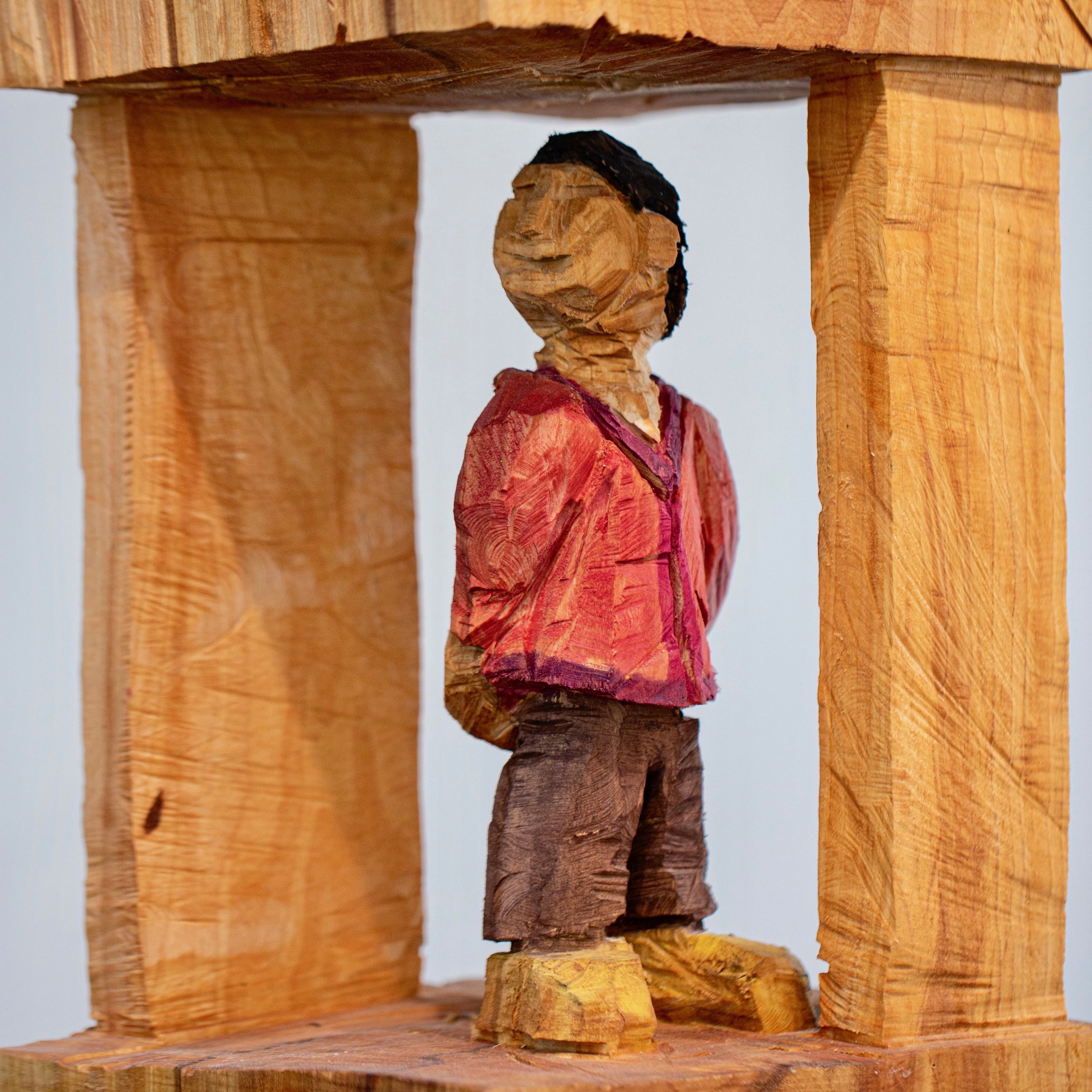 Now it gets calm in the studio: I change from chainsaws to brushes. In the model presented for the contest, I had suggested coloured wall elements – now it is clear: that would be too much. Hence only the figures get their pigmented accents.

By the way, the pigments I use bear poetic names, like Milori blue, Irgazin red or Indian yellow. And there are whole stories about these names. Milori blue, for example, is the cooked version of Prussian blue (Wikipedia), the first inorganically produced pigment – before that, blue was expensive and rare.

Mounting: thanks to professionals! 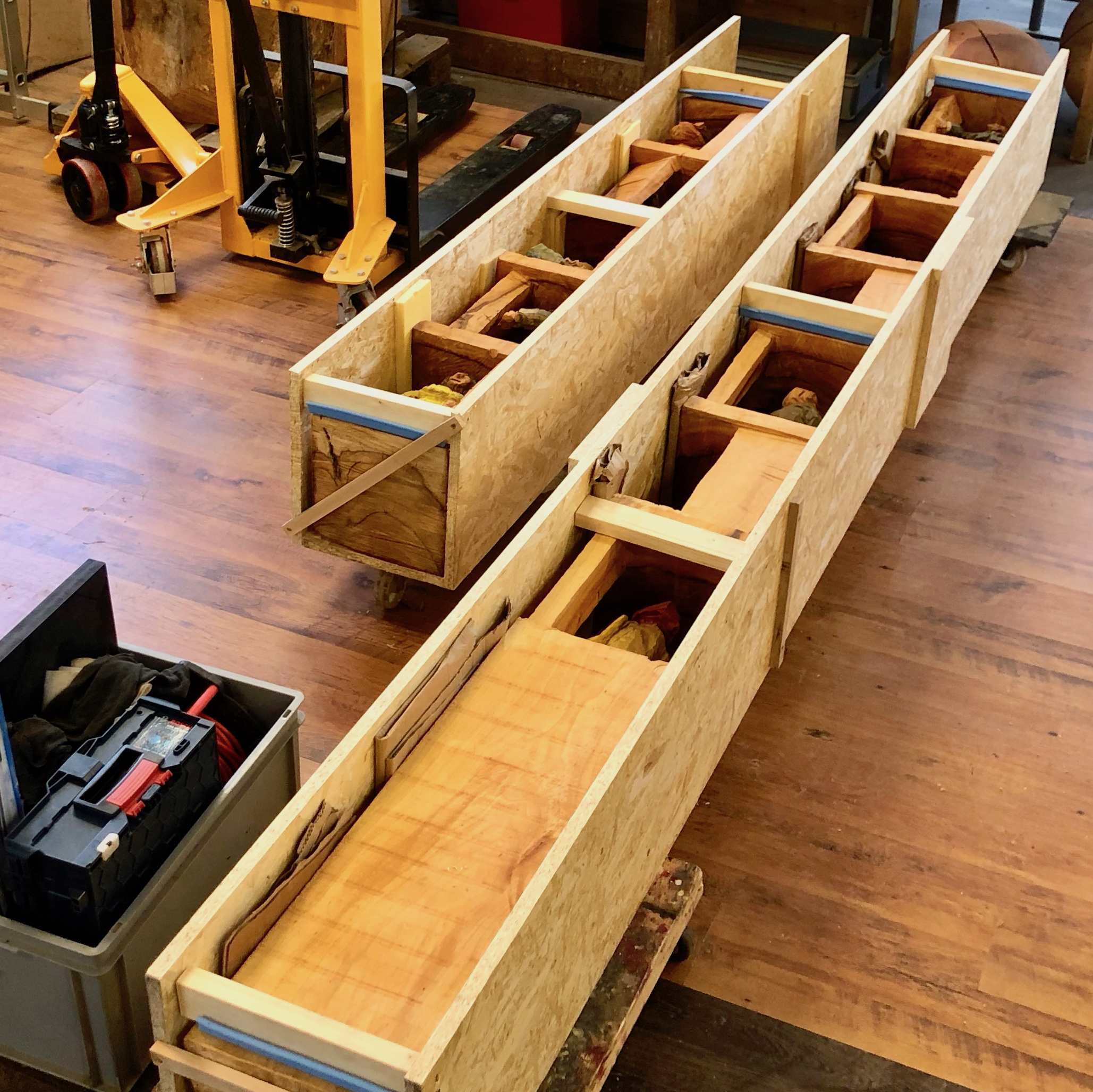 For transport the base plate must be removed, both beams are put down. But the formerly massive beams are no longer stable enough for this: a specially built transport box fits exactly against the two sculpture elements. This box holds the 30×30 cm of the intermediate floors, everything is lashed down with cardboard and a fastener set.

Hooray, they are lying – and still in one piece. Now comes the preparation of the connection: the lower and upper elements must be cut to fit exactly. So that on-site the prepared screws just have to be fitted. From whom did I learn all this? See below. 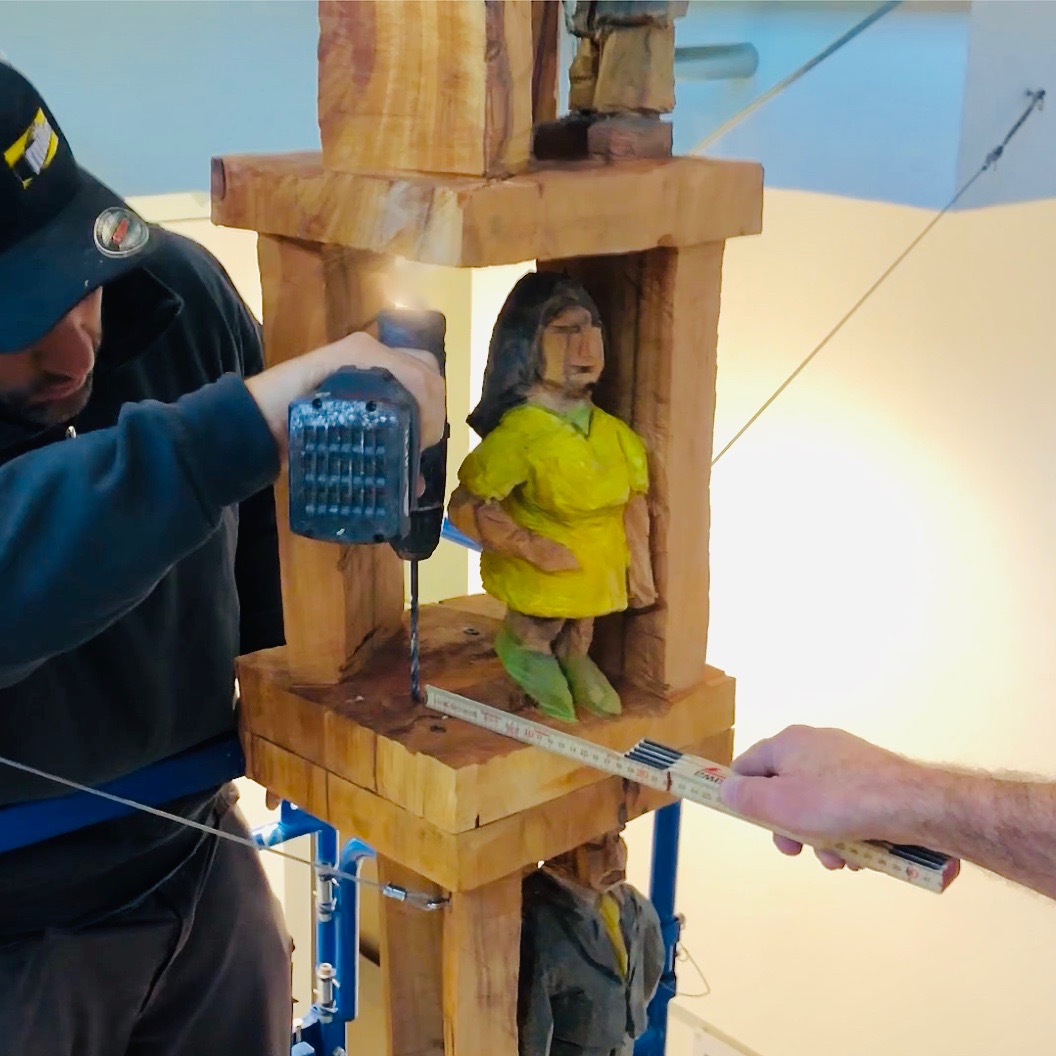 Transportation works. The definitive base plate can be fastened perfectly to the floor on-site.

With the assembly crane, we place three fine wire ropes to secure the first element. Then we attach the second one on top.

With each step, we have to decide on small things again, improvise. 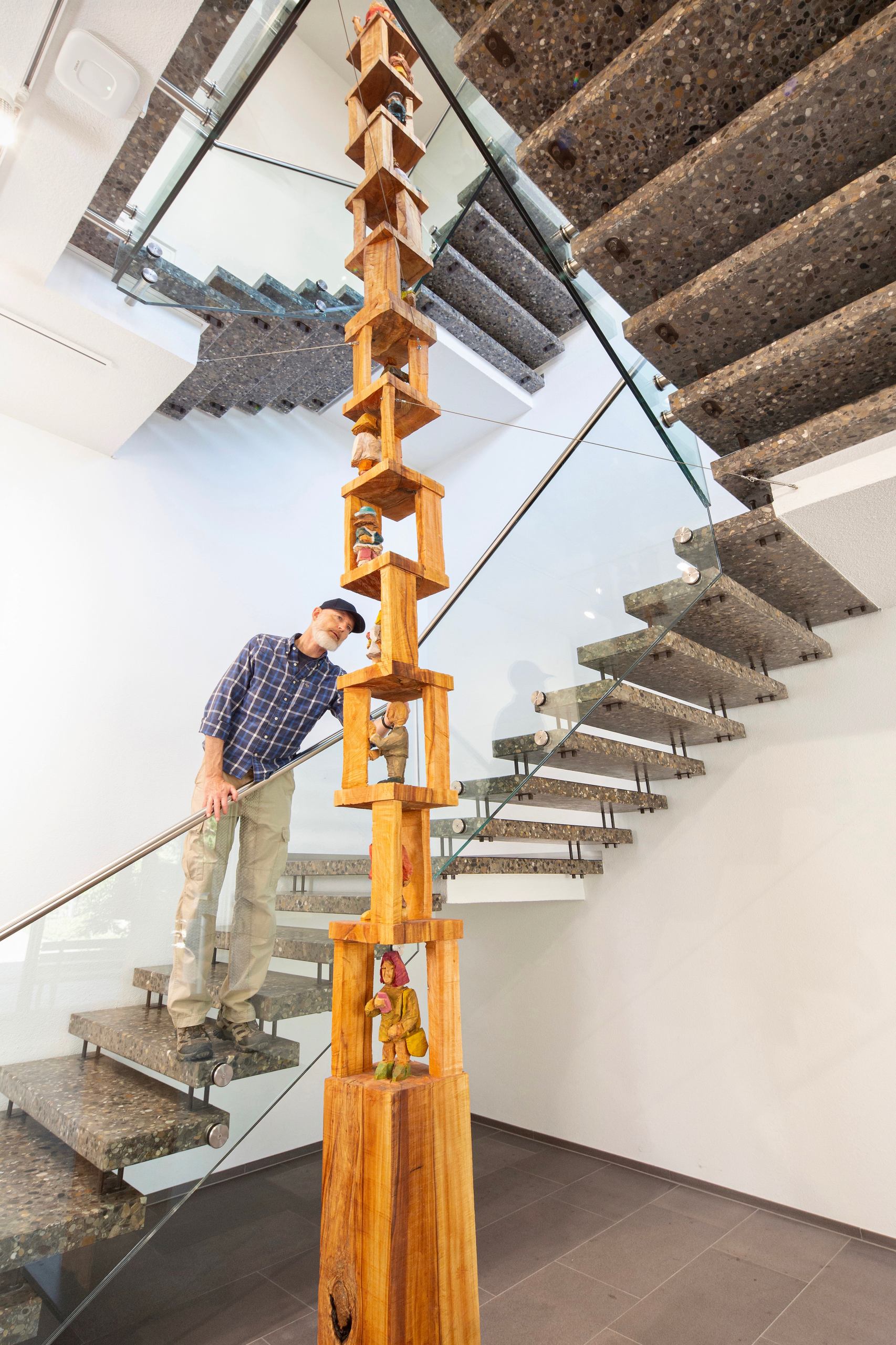 At the end of the day she stands. And how! I am satisfied, finally, at this very moment. Because I see: the figure is right. What I wanted on this long journey has been achieved: the roughly carved wood sets a lively counterpoint to the entrance hall, the colouring is perfect, the construction works.

Merci!
On this journey I have been supported by encouragement, ideas and support among many by Christian Bider, Aecherli Holz, sawmill, Rando Moricca, sculptor, Petra Rainer, photographer, Heinz Schmid, sculptor, Walter Spahr, wire bracing and much more, Thomas Stächelin and the carpenters at the team from Feuerholz, Stefan Willi, Baltensperger Metallbau, I was invited to the call for entries by Daniel Kopetschny, architect, and Heinz Haab, Hawa Sliding Solutions. 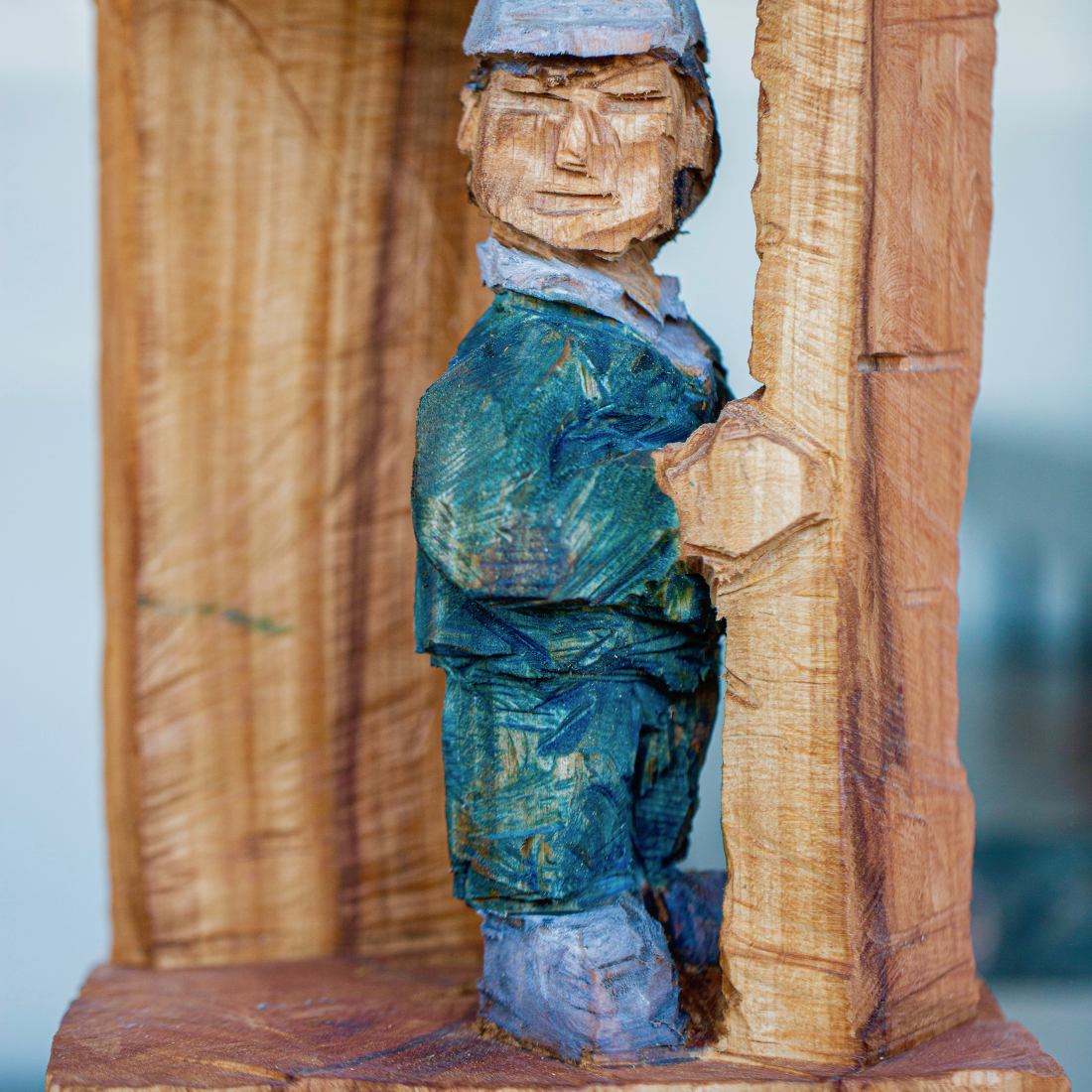 Making of: 18 months reduced to 3 minutes. 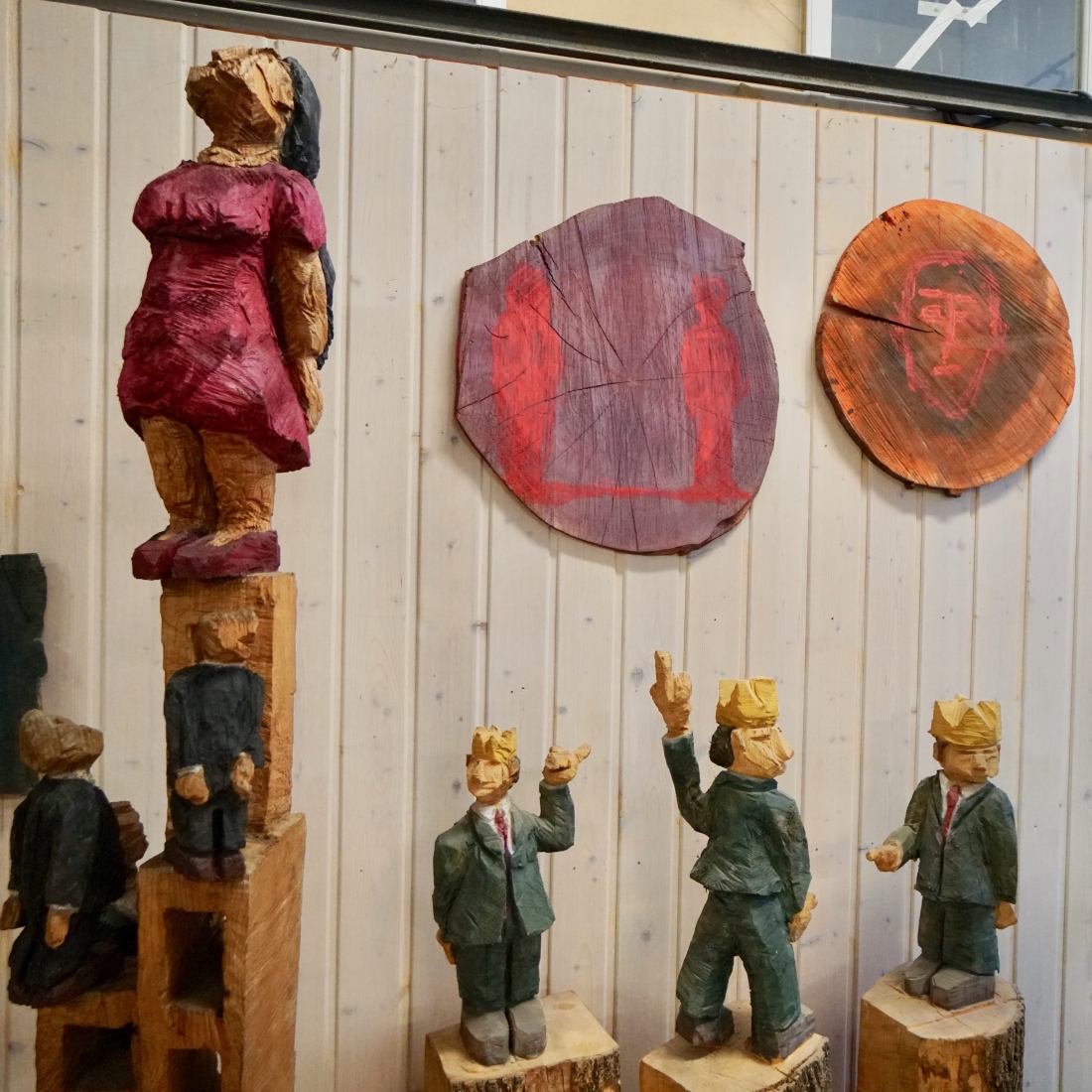